Home » Pet Blog » Will My Dog Lose Muscle if Neutered?

Will My Dog Lose Muscle if Neutered? 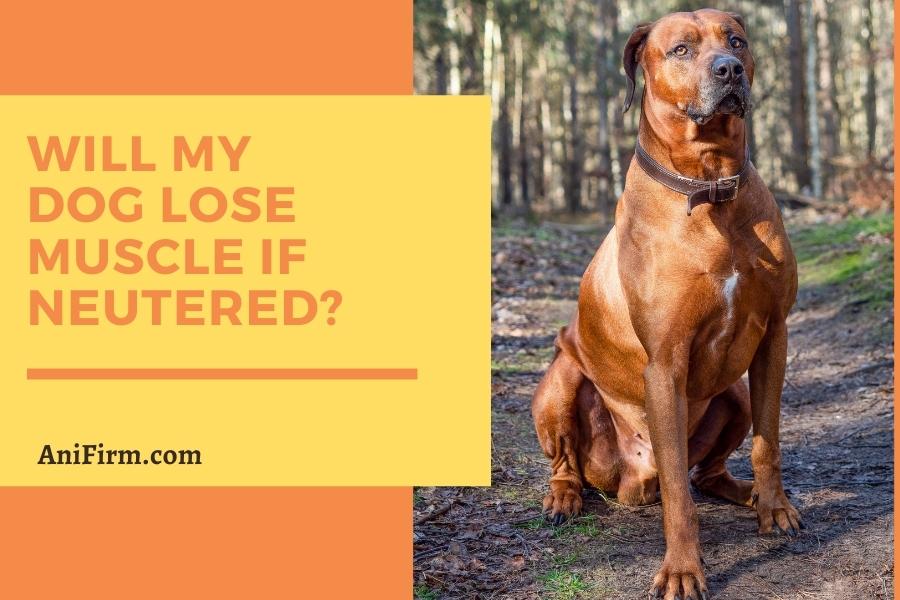 When living bodies have a balanced hormone, they function as nature intended. Even the slightest fluctuation in hormone levels lets them encounter some different issues. Likewise, it is with the dogs.

Most people consider neutering and spaying at an early age for dogs. This process takes the hormones helpful in bone development and is essential to carrying the characters as their gender. For example, in male dogs, neutering takes away the testosterone hormone, and as a result, they experience a lot of changes. Furthermore, some dogs even develop feminine characteristics. In general, the statement that neutering leads to fewer muscles in dogs is partially correct.

Keep reading as here we are discussing neutering in detail, and it’ll help you learn more about it.

What is neutering a dog?

Will your dog lose muscle if neutered?

The physical structure of a dog will not change. However, after neutering, a dog’s musculature can (and will) change. In humans (and other mammals), testosterone contributes directly to bone mass, fat distribution, muscle mass and strength, and red blood cells and sperm production. Removing testosterone from the body can have severe negative effects on men, such as mood swings, decreased libido, muscle loss, weight gain, and so on. Removing testosterone from a dog’s body achieves the same result. Multiple studies have shown that neutered dogs are more likely to be anxious, have less muscle, and gain weight more easily.

Most of this is irrelevant for adult dogs who are “just” companions. They are fine as long as they are fed and exercised properly. Of course, if they suspect the dog has muscle mass issues, they should consult a veterinarian. If there are no issues and they simply want to gain muscle mass, they could try a food additive.

It is important for people who compete in sports or high-impact events where dogs must be extremely active. Because the muscular system supports the skeletal system, it is critical for a dog to remain strong and have testosterone actively helping to build and maintain muscle in order to avoid injuries.

What does the research say about the impact of neutering on dogs?

According to one study, neutering both breeds of Golden Retrievers and Labrador Retrievers at the standard <6 month period markedly and significantly increased the occurrence of joint disorders, though the increase was greater in the Golden than in the Labrador.

The effects of neutering in the first year of a dog’s life, particularly in larger breeds, undoubtedly reflect the joint’s vulnerability to delayed closure of long-bone growth plates caused by gonadal hormone removal.

Neutering dogs and cats provide benefits such as preventing unwanted reproduction, lowering the incidence of neoplasia, and increasing life expectancy in dogs and cats. Neutered animals, on the other hand, maybe more prone to obesity. The increased proclivity for weight gain can be avoided by implementing adequate nutritional management during the post neutering phase, focusing on the correct calculation of energy requirements and the use of a proper diet.

Why is neutering dogs recommended?

For most male dogs, the neutering or castration process is carried out. The major reason for neutering dogs is controlling the population as it is a global concern. But it has an impact on their bodies as well. From muscle loss to other changes, there are a lot of changes that take place in their body. Furthermore, it is also helpful in preventing unplanned litter.

What is involved in neutering a dog?

When you approach the vet to carry out the neutering process, they remove the testicles. As in human males, their testicles are the source of testosterone, as it is in dogs. This further causes so many changes in their bodies. With time, a dog will experience sudden changes in its body. But do know that removing testicles is beneficial as it prevents diseases like testicular cancer and prostate enlargement.

Note: If castration is carried out before a certain age in dogs, it will put them at the risk of musculoskeletal disorders and cancer development.

Changes take place in a dog’s body after neutering:

There are so many changes that take place in a dog’s body after neutering. These are as follows:

After the castration process, it is quite common to notice dogs getting more into bitches. This is a natural behavior they exhibit, and one cannot stop it. Sometimes, even dog training is not helpful.

Hormone-related behavior is also noticeable in dogs. It happens that they either become more aggressive or appear to be shy. It depends on the breed as well.

Hormone-related health concerns are an indication of the conditions that take place due to non-balanced hormones. For example, some dogs experience changes in their body structure and might also encounter health conditions like thyroid and others.

Although there is no specified muscle mass in dogs, the same is not retained after neutering. Muscle mass begins to deteriorate due to bone weakness caused by improper bone development. As a result, there is an increased chance that the dog may experience hip dysplasia and cruciate ligament damage.

Will my dog’s sack shrink after neutering?

The scrotum is not removed during surgery and may appear swollen afterward, causing some discomfort with weight-bearing to the area for a short period. However, the discomfort tends to lessen over time as the swelling gradually decreases.

Do dogs get bigger after being neutered?

Although it is commonly touted that spaying or neutering your dog won’t cause them to become overweight, neutered pets do have an increased risk of weight gain. For example, these pets can suffer from malnutrition, and you should take care of this problem by feeding your pet according to its nutritional needs.

Can a neutered dog be a show dog?

Dog shows started out as a way for owners to show their animals for breeding purposes. However, the focus is on purebred dogs. As a result, neutered dogs cannot compete in those public events.

Neutering in dogs is generally a good decision, but do know it contributes to other musculoskeletal problems, especially hip dysplasia. Furthermore, dogs have less muscle mass if neutered. One can consider that when there is a fluctuation in hormone levels, ultimately dogs will suffer from some health-related conditions.