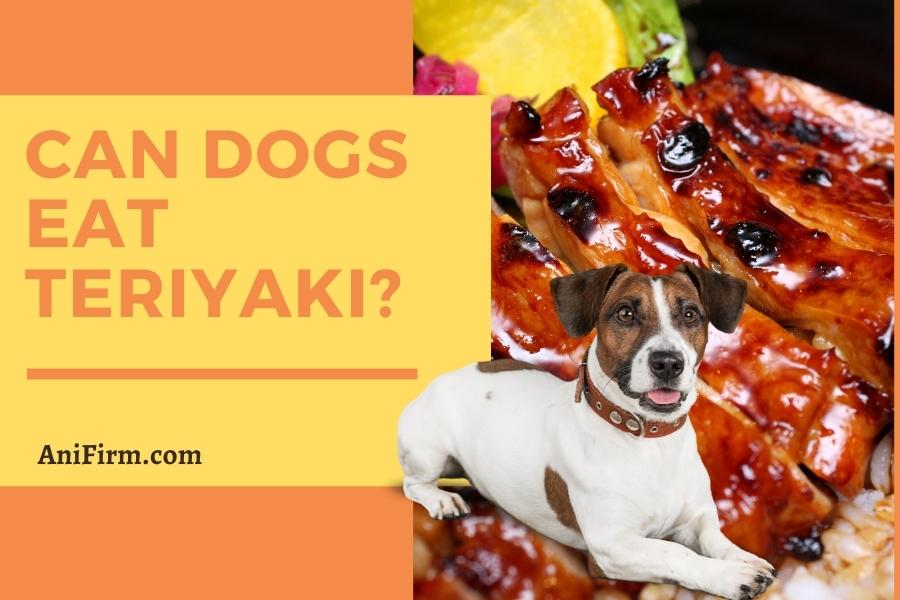 Teriyaki is among the most famous Japanese dishes prepared with a combination of fish or meat and a sauce. There are different ingredients that are taken into consideration while preparing this ultimate dish, and all of these make it likable to us. But as canine owners, we all have a thought: can dogs eat Teriyaki or not?

Well, do know that it is not an option for dogs. The ingredients like soy sauce, garlic, onion, and others used while preparing the dish are not safe for dogs and can lead to different health issues. Thus, it is advisable not to feed your dog with teriyaki chicken or its sauce at all.

For better understanding, here we are discussing the same in detail. Let’s get started!

Teriyaki is not a safe option for dogs at all. The ingredients used in it make it toxic to them, and if your dog has it, they will suffer from different health issues. Some people consider feeding Teriyaki to dogs in small portions but do know that even the small portions are harmful to them. Well, the ingredients used in it are the major culprits behind not feeding it to them.

As we have said, “ingredients are the culprit behind not feeding teriyaki to dogs.” Let’s discuss them in detail:

Soy sauce is the primary ingredient used in Teriyaki and its sauce. However, it is prepared with soya but is not acceptable for dogs. In moderation, soy is safe, but high quantities are not advisable. Also, some canines are soy-allergic, so do not consider it for them.

Also, soy sauce is high in sodium, and high sodium is responsible for causing sodium ion poisoning in dogs.

Sugar is not toxic to dogs, only if given to them in moderation. However, keep in mind that large quantities are not safe for them. While preparing Teriyaki, it is used in high quantities, which are not safe for dogs. Regular sugar consumption leads to obesity, and obesity is responsible for different health conditions like hypertension, heart disease, and diabetes too. High sugar consumption is also responsible for dental conditions.

Xylitol is a sweetener that is used to prepare sugar-free drinks and candies with a sweet flavor. But do know that it is not for dogs as it is highly toxic to them, and even a small amount of consumption leads to a drop in blood sugar levels in dogs. If not paid attention, it can lead to liver failure in dogs.

Garlic is toxic to dogs due to the presence of thiosulfate, like all other ingredients that are a part of the Allium family. As it is a part of the allium family so, yes, it is not for dogs, and its consumption leads to different health conditions, including acidity, hypertension, and so on.

Onions are also toxic to dogs, and no wonder, being a part of the Allium family, they show a negative impact on a dog’s health if consumed.

Caramel color is also used in preparing soy sauce, and it is not for dogs at all. According to the research done by the California Office of Environmental Health Hazard, it is proven that caramel color consumption is responsible for cancer and reproductive toxicity.

Mirin is among the most important ingredients used while preparing Japanese dishes. It is a type of rice wine with high sugar content and low alcohol content. Also, it is high in calories, which will make your dog obese.

Note: If your dog has Teriyaki, even if it is a small amount, do not ignore him and monitor him for all the changes. Reach out to the vet in case of health issues.

As we have already discussed, Teriyaki is not a healthy option for dogs, so yes, it is clear that its consumption will lead to different health issues too. The common health issues that dogs will face include:

Can dogs have teriyaki beef jerky?

Beef jerky alone is a safe option for dogs, but with teriyaki sauce, it is not safe at all due to the presence of xylitol in it. If your dog has it, there are chances he will suffer from dental issues, gastric issues, hemolytic anemia, diabetes, vomiting, constipation, and oral issues. Thus, avoid feeding your dog with teriyaki beef jerky.

Can dogs have teriyaki pork?

Although pork is a great option for dogs, combining it with Teriyaki is not acceptable for dogs. As we have already learned, the ingredients used in Teriyaki are not safe for dogs, and their addition to the dish makes them harmful for dogs. If your dog has consumed teriyaki pork, there are chances they will suffer from periodontal disease, gastric issues, constipation, diarrhea, heartburn, and so on. Its consumption is also responsible for causing oxidative damage to red blood cells leads to hemolytic anemia.

Can dogs have Kikkoman teriyaki sauce?

It is also not advisable to feed your dog this sauce. Although Kikkoman is a famous brand around the world, do know that it comes with a lot of sugar and other toxic ingredients like garlic and onion in it. It does not contain xylitol for sweetness, but garlic and onion make it bad for them.

Can dogs have teriyaki chicken?

No, teriyaki chicken is not an acceptable option for dogs due to the presence of harmful ingredients in it. Some of the major ingredients that are used to prepare it include xylitol, garlic, onion, spring onion, and so on, which are toxic to dogs. If your dog has it, they will suffer from different health issues, including hemolytic anemia, vomiting, diarrhea, dental issues, and some other issues too. Thus, to keep your dog safe, avoid feeding him with such food ingredients.

Is homemade Teriyaki a safe option for dogs?

Homemade Teriyaki seems to be very difficult to prepare for dogs. The reason being, without the actual ingredients, Teriyaki is incomplete.

However, if you are ready to prepare the same at home without all the toxic ingredients, then only you can think of feeding your dog with it.

Can teriyaki consumption kill my dog?

There is no such evidence that can prove this to be true or false. On the other hand, there are some cases where the canine owner’s irresponsive behavior and teriyaki consumption cost the dog’s life, and on the other hand, some owners successfully save their canines.

Can dogs have teriyaki chicken bones?

Teriyaki chicken bones are not for dogs at all. Its consumption can lead to a choking threat. Also, in general, bones are difficult to digest and lead to gastric issues too.

Teriyaki is not safe for dogs in any case. Although one can think of preparing it with all the dog-safe ingredients, one should still try to avoid the same. The ingredients used in it are highly toxic to dogs, for which reason it is advisable to avoid it. If your dog somehow consumes it, take him to the vet immediately. Avoiding the same can cost your dog’s life too. Thus, be sure to keep the teriyaki bowl away from him if you are fond of having it.