Home » Pet Blog » Why Does My Dog Hit Me With Its Paw?

Why Does My Dog Hit Me With Its Paw? 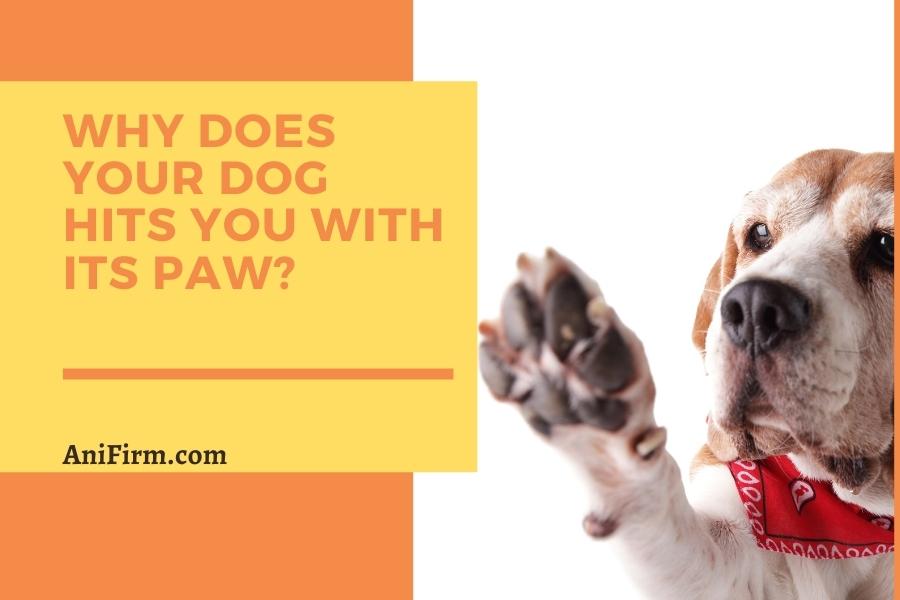 If your dog punches you or hits you with his paw, you may be curious as to why and what you can do about it. Your dog may be attempting to get your attention for some reason. There could be a variety of reasons why your dog hits you with his paws. Let’s look at some possible explanations that might help you figure out what’s going on.

What are the reasons for your dog hitting you with its paw?

Several different reasons would clear all of your doubts and assist you in determining your dog’s exact condition. Here are some of the reasons and causes that would increase the likelihood of your dog hitting you with his paw.

To persuade you to stop

It could be that it wants to stop you or someone else. For example, let’s say you’re petting it, and it decides to stop you by hitting you with its paw. Also, if someone teases him by pulling on his tail or ears, he will show signs of discomfort, such as hitting with his paw.

As a result of previous training

It could be because it was trained to do so in the past. This is more likely if you took your dog from the street or adopted it after his puppy years.

Trying to get someone’s attention

You may have discouraged your dog from barking loudly or engaging in other demonstrative behaviors. It may start hitting you with its paw as a new and silent way of getting your attention. It may hit you if it wants to go for a walk outside, especially if you are not paying attention or are watching television.

Paw hitting for attention may occur when you are on your way to work or getting ready to sleep. This could be as simple as a scratch for you, letting it go outside.

To get my attention, my dog does not tap me, but instead tries to push my hand with its snout. Whenever I feel a push coming on, I often ask him, “Are you hungry?” What happened to your toy? Would you like to go outside? Then, depending on which question receives the most responses, I understand what my dog actually wants to say.

You must treat all dog actions and barks in the same manner as you would a baby’s cry. It’s a lot of fun and pure pleasure to decode dogs, but it can take years for both of you to understand each other and get used to the communication.

Your dog is imitating you

If it hits you while you are petting it, it could be because it is imitating you. When you pet your dog out of affection and love, he reciprocates with the same feelings. It’s possible that your dog is petting you to show that he enjoys and appreciates it.

Your dog wants you to give it something

If it is more likely to do it at a certain time, it is possible that it wants you to give it something. He might want to go for a walk, ask for a treat, eat the food you’re eating, or if he hasn’t been fed yet.

When you encourage his behavior, he will continue to do so.

It wants you to rub its stomach

It wants you to pet it more

It could be that it does it because it wants to be petted more. If he does it when you stop petting it, it will show you positive signs such as wagging its tail or leaning on you.

Because of love and affection

It’s possible that your dog is hitting you with its paw to show affection. Dogs, like humans, express their love through physical touch. When dogs hit you with their paws, they are simply expressing their affection for their parents through physical contact. That is why dogs bite pet parents when they pet them. The dog can tell they’re having a bonding moment, and while it may appear silly, your dog is probably trying to pet you back and reciprocate your love.

Should I put a stop to my dog’s paws hitting me?

The answer is an unequivocal yes. It would help if you either stop your dog from hitting you with its paws or teach it to control its hitting habit. Everyone does not like this method of communication because it can cause serious harm. Still, the answer to this question is dependent on a variety of specific circumstances.

If your dog hits you when he wants to go for a walk, this is an excellent communication skill because it lets you know what he wants before an accident occurs. But if he hits you every time, you’ll probably get tired of it pretty quickly.

If you had a friend who used to poke you on the arm every now and then, it’s fine. But if your dog did it every time they saw you, it is not a good gesture.

How can you prevent your dog from hitting you with its paws?

Before you begin doing anything else, you must clip all of your dog’s nails. When your dog bites you, its long and sharp nails can cause injury. So just keep in mind that whatever you teach your dog, make sure his nails are clipped.

Teach your dog to Handshake or High Five

You can teach your dog other great gestures such as shake and high five instead of hitting. These gestures are pleasing to the eye and demonstrate that your dog is well-trained. If your dog learns to shake hands or high five, he will learn something other than the gesture he uses to go outside.

Putting a stop to this behavior by not giving rewards

If your dog used to hit you when he wanted a treat from you, and you’ve been trying to make him understand the importance of not hitting you, try rewarding him when he’s been nice all day. For example, if your dog is sitting quietly in your passage, reward him with a treat. Give your dog a treat if he walks nicely and never bothers you.

Redirect its attention to something else

It’s fine if your dog tries to pet you back to show affection, but it’s not okay if your dog punches you in the face. It’s possible that you’ll get some scratches, which could be dangerous for others. If you want to prevent your dog from hitting you or anyone else with its paws, you must first clip his nails. You can punish his behavior while rewarding other positive behaviors. You can also redirect its attention and teach it new behaviors such as shaking paws and high-fiving.