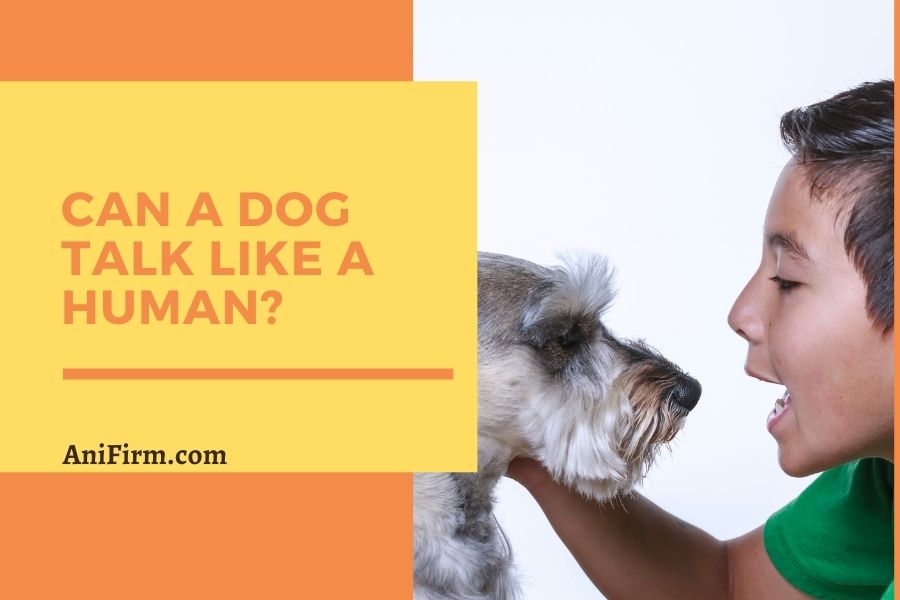 Communication is one of the best ways to understand what the other person is up to. Well, this is the case for humans only. If you wish to communicate with animals, you need to be sure about the best adaptable method for doing it. If you have a pup at your place, then sometimes you might become an open book to him, but in return, he just nods his head instead of saying anything. It might make you feel annoyed and make you wonder if a dog can talk like a human or if there is any possible way through which he can respond to you.

Well, if this has happened to you, here we have come up with all the answers so that next time you will not feel annoyed and understand your pup’s zone too.

According to research, a dog’s brain is not developed enough to distinguish between words with a single speech sound. For example, “sun or soon,” “moon or noon,” and some other words with the same single speech sound. In this situation, a dog resembles a human infant who also does not have the capability to make distinctions between words. Furthermore, at a dog’s age, they lose the ability to understand speech in the same way that humans do.

Can We Train Our Dogs To Talk Like Humans?

Well, when it comes to training dogs to talk like humans, it is possible. But understand that they use their vocalizations to communicate. They can’t use their lips and tongue like humans, so they’re trained to imitate certain sounds. It is entirely dependent on how your dog understands the sentence or how they communicate it. For example, most dogs convey “I love you” as “Wa-Rooo-Roo.”

It is clear that dogs cannot talk like humans, and the scientific reason is a difference in their voice boxes and their brain activity. The dog’s brain is not developed enough to understand words with a single speech sound. They find it difficult to know what the master is actually trying to convey.

But when it comes to conveying what a dog actually feels, they use some particular sounds like:-

Among all these sounds, barking is common, and it helps the master to know there is something troubling the dog. According to research, barking is a sign to convey that they are in need of something or they are going through something torturing, and they need human help to get rid of it. But reaching a conclusion on a general basis is not enough. So yes, do analyze other signs and symptoms too.

In most cases, a person can also read their body language. In particular, the parts that need to be focused on include:

Along with these, goosebumps may also be there, which indicates the problem with dogs. Also, if you know your dog to the core, then noticing the sudden changes in their body language can also help. as in:

Disabilities With Dogs From A Human Perspective

From a human perspective, certain disabilities are also noticeable in dogs. These are:

How Do Our Dogs Communicate With Us, And How Do We Talk Back?

Starting to understand dog psychology to communicate seems to be difficult at first, but it is a fun learning experience. If you wish to know how dogs communicate with us or how we can talk back, just focus on the non-verbal cues given by dogs. The non-verbal cues indicate that a dog is not in a saturated state and there is something. The changes that appear can be due to excitement or trauma. But it entirely depends on the ongoing situation.

Tail language is among the common signs given by dogs about their state. But due to a lack of knowledge, we misunderstood it and were not able to understand what was actually happening. For example, we consider a wagging tail to be a happy state, but this is not the case. But some common tail motions to remember include:

Ear language is also among the most considerable non-verbal cues to notice in dogs. Some common ear motions to remember include:

Note: In general, the more flattened the ear, the more submissive the dog is, and the same is the scenario with other ear motions.

Eye language is also a part of non-verbal cues with dogs. Dogs do a lot with their eyes, and it is among the most popular dog languages. A master can easily understand whether his dog is happy or not. But it requires a bit of close attention and observation. Some eye motions to notice are:

Dogs cannot talk like humans but adapt to their own ways of communicating with us. If we try, we can teach our dog how to communicate, but in their language only. Some noticeable non-verbal cues are also there that are helpful in understanding the current state of the dog.