Can Hamsters Die from Loneliness? 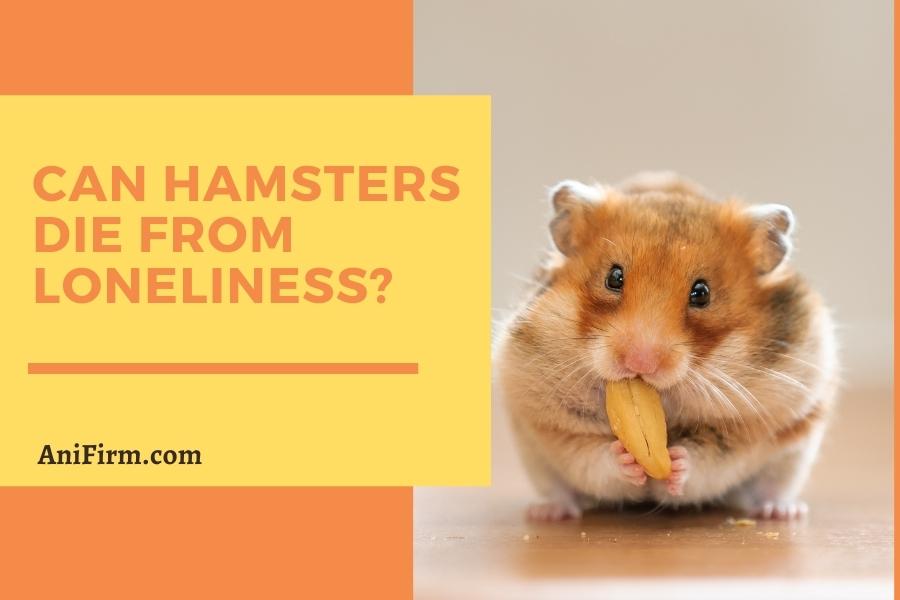 Do hamsters get lonely?

Hamsters are solitary animals. They can not get lonely as they love their own company. If you keep them in pairs, they will get into bloody fights. Hamsters are small rodents like other rodents who love to be alone. Hamsters live in the desert in burrows or tunnels and only come out to protect their territory and food from other hamsters.

In the wild, hamsters prefer to be alone, though, in captivity, they behave differently. Hamsters in captivity will get stressed out(alone) if all of a sudden their owners are out for weeks. The human presence is necessary for hamsters kept in captivity because they get used to it.

So, hamsters do not get lonely at all but need interaction with their human owners.

Can hamsters die from loneliness?

No, hamsters can never die from loneliness. They love to live alone because of their solitary nature. Syrian hamsters can die if you keep them together. They are solitary animals; they can get into fights if paired together. If you keep your hamsters in the cage for longer, they will get bored, increasing their stress level and becoming lonely. Stress lowers their immune system. The signs of loneliness are stress, depression, aggression, and destructive behavior. Playing with your pet can reduce their chances of loneliness.

In the wild, they mostly live alone because of their natural behavior. Therefore, they could not die from loneliness. On the other hand, human absence for a more extended period makes them lonely because they get used to it. However, if you see your hamster is lonely, playing with them can reduce their chances of loneliness. But they can not die from it.

Should hamsters live alone or be kept in pairs?

No, hamsters should be kept alone in the cage because keeping them together could lead to deadly fights. Since wild hamsters do not love to be in pairs, so do captive hamsters. Hamsters are territorial animals, so they love to be alone. Syrian hamsters do not like to be kept with other hamsters. Dwarf hamsters are social; they can be kept in pairs. But if you want to keep two dwarf hamsters together in a cage, keep them at the same time; introduce them to their cage first at the same time.

If you add one hamster after the other, they will get into fights because hamsters are territorial animals, so they protect their territory from the other hamsters. Therefore, they do not like the companionship of other hamsters.

These are the social requirements of captive hamsters:

Can we add two hamsters to the same cage?

If you are planning to keep two hamsters in the same cage, then follow the below steps to help them live together:

Can Syrian and Chinese hamsters be kept together?

Syrian hamsters and Chinese hamsters are solitary animals. They both love to be alone and do not like other hamsters’ company. They both should be kept in different cages and they do not feel lonely. So they will not die from loneliness.

Syrian hamsters are highly territorial and aggressive. They love to be in their own company. Chinese hamsters are also very aggressive and territorial in nature. They both can never live together. Both breeds will fight for their dominance over the cage. Their fight can cause serious injury, illness, stress, and anxiety, sometimes leading to death. Therefore, it is advisable to keep both hamster breeds in different cages.

Can two Campbell’s Russian dwarf hamsters be kept together?

Campbell Russian Dwarfs hamsters are social animals. So they can be kept together in the same cage. It is the only breed that can be kept in pairs or groups only if there is enough space. But never pair mixed dwarf hamsters together because keeping them could lead to territorial behavior, aggression, and fighting. For example, you cannot put two Chinese hamsters in the same cage, or else they would get into fights. So if you want to keep two dwarf hamsters in the same cage, always keep the same pair of hamsters (a pair of Robo or a pair of Campbell’s Russian hamsters). They can never get lonely or can never die from loneliness if you put them together.

No, hamsters are not very social animals. Like other animals that need friends and companionship, hamsters do not like the company of any hamster. For example, Syrian hamsters are not social though they can bond with humans well. Dwarf hamsters are somehow social with other hamsters and even their human guardians. They can love to live in pairs.

Hamsters love to bond with their owner. In fact, they love the affection that humans show to them. But they can only get connected to one or two humans. If you keep your hamsters in a confined cage for longer, they will be lonely and will not live much. Playing with your hamsters makes them happy and healthy. You can interact with them occasionally, so they will not get bored.

Should I play with my hamster?

Do hamsters live alone in the wild?

Hamsters live in the desert; they come out of their tunnels to protect their territory and food from other hamsters. According to Live Science, some species prefer to live alone while some prefer to be in pairs. They only come together when they want to breed.

Breeding is necessary because they are prey animals and very vulnerable; to protect themselves from predators in the wild. Syrian hamsters and other breeds fight and show dominance for the right to breed. Remaining time, they prefer to live alone. Dwarf hamsters prefer to live in pairs for survival because of their small size.

So yes, hamsters live in the wild alone.

It is correct that they can not die from loneliness, but the things that make them lonely are stress, depression, or if they stay away from their owner for a long time.

The human presence is necessary for hamsters if they are in captivity. Otherwise, they will become sick or die. Hamsters love to be alone, but they like human company. Syrian hamsters do not like anyone’s company, dwarf hamsters prefer to be in pairs, and they love the affection of humans. So give time to your hamster, cuddle with them, play with them, and it will make your hamster’s life happy and healthy.

It is rightly said, “A LONE HAMSTER IS A HAPPY HAMSTER“. So we hope you get an idea from this article whether the hamsters die from loneliness or not. We’ve also shared some views on whether they can live alone or be kept together.