Home » Pet Blog » Will Dogs Ever Be Able To Talk?

Will Dogs Ever Be Able To Talk? 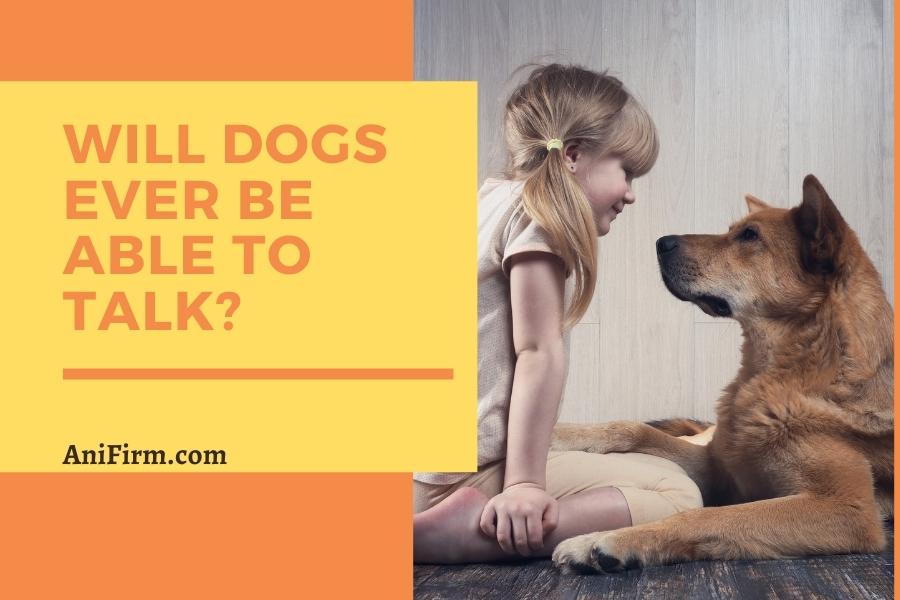 The structure of dogs’ bodies and brains is the primary reason they cannot speak or communicate. Despite their ability to generate complex sounds and communicate their desire for a treat through body language, dogs’ brains are not designed to comprehend complex vocal languages.

Dogs have been domesticated for thousands of years. You’d think they’d figured it out by now, but it all comes down to brainpower. They must train humans as they age: a human brain requires the ability and stability that only comes with age—this is how we can learn language abilities such as speaking and interpreting words because our brains are stronger than dogs’.

It’s worth noting, however, that our fuzzy pal’s vocal cords aren’t all that different from ours. If dogs possessed the cognitive ability to do so, they could theoretically vocalize in a manner comparable to humans. On the other hand, their sounds would most likely be gravelly and/or difficult to understand.

This is because they primarily develop their vocal cords for barking, growling, and other deep, long-distance sounds.

However, because many dogs can make high-pitched noises, especially when startled or scared, it’s impossible to predict how they would all sound.

As per a research paper published on 10 May 1912 by Harry Miles Johnson, they judged dogs ability to communicate based on three speech definitions

first, properly, as the use of vocal sounds to convey to the listener an idea experienced by the speaker;

secondly, more loosely, as the production of vocal sounds learned by imitation, but used without knowledge of their meaning to the hearer;

and thirdly, as the production of vocal sounds not imitative of human speech, having no meaning to the speaker, but producing in the hearer illusions of definitely articulated, spoken words, uttered to convey meaning

& concluded that dogs can’t talk but they can imitate us and sometimes it can feel like they are taking but that is not possible as per facts.

Is It Possible For Dogs To Talk?

Dogs are unable to communicate due to a lack of cognitive abilities. Even if they had the mental capacity to communicate, the shape of their lips, tongue, and voice box all contribute to their inability to do so. Dogs can understand basic words in the same way that a two-year-old can.

Human babies experience the same difficulties understanding speech until they are about fourteen months old. Following that, students will naturally learn to understand the differences between similar terms, assisting them in mastering the complexities of their country’s spoken language.

Similarly, they understand the significance of words’ sounds and why each sound is so important. Because of this, humans learn to babble when they are young.

Unfortunately, dogs are unable to recognize these distinctions, making communication difficult. Because of their importance in nature and our existence, it is unlikely that they will ever develop this ability.

What would happen if dogs could communicate?

The ability to communicate with dogs and other animals would change society forever. We would not only have stronger emotional bonds with them, but we would also be more capable of saving their lives.

Canines could notify their owners if they became ill or injured. Unfortunately, when a dog is sick or injured, a significant percentage of them show very few symptoms and will sometimes purposefully conceal their pain or suffering.

We might be able to reduce the guesswork involved in determining what is wrong with our beloved pets’ health if we could communicate with them.

In the long run, this could save a lot of dogs from being shot by cops or gun-wielding residents. In addition, this could help us calm them down and figure out what steps we should take to help them curb their violent tendencies.

If dogs could communicate with us, they could warn us of potential dangers. Although dogs can alert us by barking, dogs that can communicate with humans can tell their owners exactly what the perceived threat is.

What is the best way for dogs to communicate with humans?

Dogs communicate with us through body language, facial emotions, and sounds. For example, when they’re upset, they’ll growl, and when they’re at home playing tug-of-war, they’ll bark as an alarm. If they feel threatened by something in the environment, they may tuck their ears back and adopt a specific posture to show that they are fearful or defensive.

Even though dogs do not speak our language, we can learn to recognize their body language when they are attempting to communicate with us. Unfortunately, it’s not always easy; some dogs only show the tiniest hint of what they want or need, so you’ll have to exert a little more effort and patience!

What can I do to better understand my dog?

Spend time with your dog and pay close attention to them to get to know their personalities. The more time you spend with your dog, the easier it will be to get to know them. Then, examine the list above to learn how to read a dog’s body language in various emotional states. You’ll be able to understand your dog’s every need in no time if you have a lot of patience.

Maintaining a consistent tone of voice during training is crucial.

When training a dog with your voice, it’s critical to be as consistent as possible. When an action or non-action is necessary on their behalf, your dog will have a better chance of picking up on your words. Also, speaking in a certain tone will attract the attention of dogs, causing them to become more concentrated.

Do scientists think that dogs might be able to talk in future?

dogs are capable of recognizing words they are familiar with — e.g. instruction words — just by listening to them

Scientists aren’t sure whether puppies respond to dog-directed speech instinctively or if it’s something they learn. It will also take additional research to see if the words in dog-directed speech have greater meaning for the puppies or if they help them learn the language. Meanwhile, make sure you’re ready to play when you talk doggie to your puppy.

Fifty years ago we never imagined that we could reach Mars or do video calls but today it is possible. So, no one can surely answer that will dogs ever be able to talk? But it is highly possible that a new technology could emerge which can make it easier to talk with our pet dogs.

What Is The Maximum Number Of Words A Dog Can Understand?

Do you ever communicate with your dog? You, of course, do! Don’t we all, after all? And, if you’re anything like me, you’ve undoubtedly had full discussions with your canine companion. However, how much of it does he comprehend? Some? All? None? Continue reading to learn how many words a dog can understand.

What’s the first thing you do when you get your new puppy home?

Of course, name him.

Communication begins here, even if we aren’t thinking of it in such specific terms. So, at first, it’s Fido this and FeFe that wherever your pooch goes. You simply repeat your puppy’s name as many times as possible until he turns his head to look at you when you say it. Isn’t that the most wonderful sensation? Fido is familiar with his name.

Then you add other words to the mix. Many people call them instructions, but they’re simply human words that your dog will pick up on. I always begin by sitting. Then I’ll perform things like paw, stay, down, wait, come, fetch, heel, up, and so on. You’ll be speaking in no time with a little practice and a lot of patience.

What Is The Maximum Number Of Words A Dog Can Understand?

Depending on whose expert you consult, this varies slightly. “The typical dog can learn 165 words, and dogs in the top 20% of dog intelligence can learn 250 words,”

Instructions on How to Teach Your Super Dog New Words

Be patient and make your learning experience enjoyable. Although some dogs will learn faster than others, give them plenty of opportunities to practice, be rewarded, and be praised.

Consistency is key. Find out that everyone in the household refers to the thing or action with the same word or words. Otherwise, it will get perplexing, and learning will become tougher.

Use hand gestures besides verbal messages. If you’re teaching your dog safety cues, this is extremely vital. Dogs understand body language and hand gestures. For example, if I’m teaching “wait,” I’ll constantly hold my palm up in front of his or her face, so they understand I’m saying “stop.”

Our canine partners will create their own manner of communicating with us from an early age. Dogs can communicate with us by pacing, whimpering, growling, or tapping their feet to show whether they are hungry, playful, nervous, or excited.

These characteristics vary by dog based on personality or temperament, with some dogs being more expressive than others.

Dogs, like people, develop habitual behaviors and subtle body language nuances, which they will utilize to “speak” to their owners.

Despite this, there is little doubt that we cannot fully communicate with our dogs on a one-to-one basis, which is a disappointment for many dog owners.

After all, picture a future where we could tell our canine companions how much we love them, chat to them about our issues, or apologize when we walk on their tail or paw accidentally — this is the dream of millions of dog owners throughout the world.