Home » Pet Blog » Why Does My Dog Carry Its Food Bowl Around?

Why Does My Dog Carry Its Food Bowl Around? 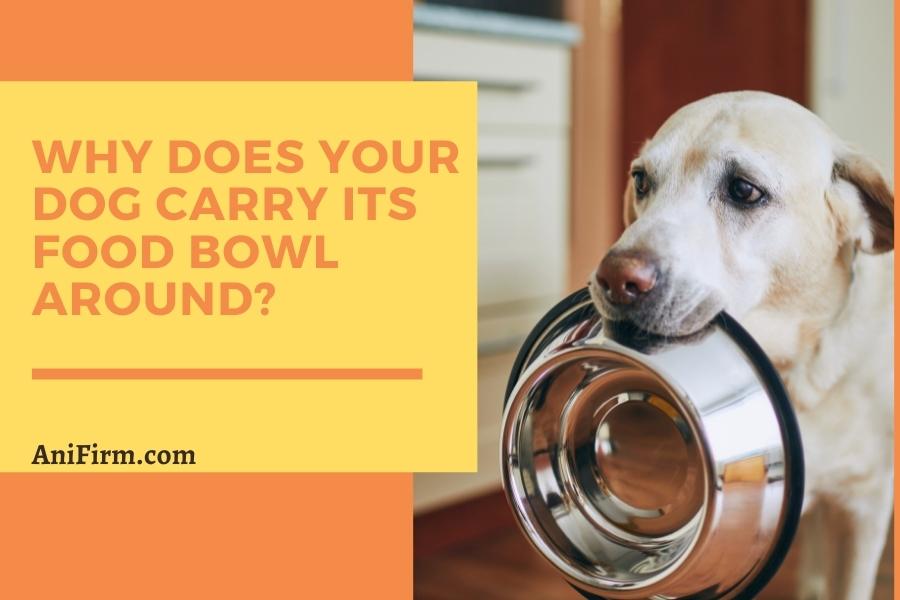 If your dog has developed a habit of carrying its food bowl around, then you might be thinking why and what you can do. There are certain reasons which make your dog carry its food bowl around. They generally carry their food bowls when they are hungry or experiencing some sort of teething problems. Now the question that is frequently asked – Is it normal? Well, this is difficult to answer until we understand their language.

What can be the possible reasons for your dog carrying its food bowl?

There might be a lot of reasons for your dog carrying its food bowl. Take a look at these reasons as one of them might convince you to think again:

Teething can be the possible cause as carrying its bowl can soothe its teeth. As you can find this teething problem in infants and we often give them some sort of toys to soothe their teeth. Similarly, if your dog is young, he will surely soothe its teeth by biting something and carrying its food bowl around.

To remind you to feed it

It could be possible that it is trying to remind you to feed it by carrying its food bowl around. This would be more likely when it has not been fed yet, or it is experiencing hunger even after eating food. Just examine it closely and see if it stops after being fed.

We often do some sort of awkward things when we are anxious. Similarly, dogs often carry their food bowl around out of anxiety. This would be more likely when it is anxious such as when you are going somewhere without it, or you are sending it with the one it has never met.

Dogs are like the kids in the house. As if you might have seen, kids often do those things more for which they are rewarded or praised. Similarly, if you tend to give it treats, food, or extra attention, when it carries its food around, it will surely do it more in order to get more attention and rewards.

Playing with the food

You might have noticed that your dog carries its bowl around when there is food in it. This is because it may be playing with the food inside. It enjoys watching the kibbes bounce up and down and feel more fulfilled while eating.

It might be that your dog is feeling lonely while eating separately and want to sit with you. This is because dogs generally love companionships, or maybe it loves you the most. So, it carries its food closer to you or another member of your family.

Your dog wants to hide or protect the food

This could be another reason that when your dog carries its food bowl around, it might be looking for a safer place to hide its food. Now, you might be thinking that who is going to steal its food, but it is not the case. It is just that it is following an instinct to eat without the risk of another dog trying to steal its food.

Your dog is creating a personal stash of food

It might be that your dog doesn’t like the food that you have served in the bowl, and that is why it starts moving its food bowl around in search of something else to eat.

Your dog wants to hide food from other animals

It could be the case that your dog has a hunting instinct that other animals would steal his food, and therefore out of that instinct, your dog tries to hide its food from other animals.

It might be that your dog is choosing an easy serving space, so it moves its food bowl closer to your dining table or the kitchen.

How to train your dog to stop moving their food bowl around?

If you want your dog to stop moving its bowl, then there are certain things that you have to keep in mind and train your dog accordingly. Some of them are listed below:

It could be possible that your dog has learned that its behavior gets rewarded. If you want your dog to avoid moving its bowl, then it’s necessary for you to understand first that you should stop rewarding your dog, and this would make it understand that it would no longer be rewarded and it would stop moving its food bowl around.

Feed it at the same time

It could be the reason that your dog does not know when it will be fed, and for this, when it gets hungry, it carries its food bowl around to remind you to feed it. So, you must ensure that you feed it daily at the same time so that it knows when it is going to get food. This will make it stop moving its food bowl around.

Having a heavier bowl

If you want your dog to stop moving its food bowl around, then you can go for a heavier bowl as it would get difficult for it to carry the heavier bowl in its mouth.

Give him other things to carry instead

Another thing that you can do is to give it other things to pick up that you are fine with it picking those up. You can give it toys or bones or any other things that can’t be swallowed by your dog.

Just try to redirect its focus on something else whenever it seems like it is going to pick its food bowl up. If you do this regularly, then you will surely be able to get it out of the habit of picking its food bowl up.

You could find a solution to this problem in our post about using a concrete food station with stainless steel food bowls for dogs.

Why does my dog pick up his empty food bowl?

If you are wondering that why does your dog carries its empty food bowl, then here is the answer. It is simply that it is hungry or wants to remind you to feed it. Dogs are quite punctual and like to stick to their timetable. So, if you notice your dog moving here and there with an empty bowl around the feeding time, then you can be sure that it is ready for its meal.

Why does my dog hide his food bowl?

This could be due to your dog’s instinct that its food might get stolen by the possible snatchers. So, he hides his food due to instinct. Also, if you have more than one pet, it’s likely that your dog is getting territorial over its property. He is afraid that your other pet will take away his food. That is why your dog hides his food.

What else happened when it first started doing it?

If your dog never did this before or he has suddenly started carrying its food bowl around then, it might be due to a change in its diet causing it to get hungrier even after having food. This could also be due to something that is making him anxious, or you have started rewarding this behavior. It might be that your dog has learned that his behavior gets rewarded, and he has started doing this in order to get more rewards.

What is different when your dog carries its food bowl around?

There are many possible reasons that cause your dog to carry its food bowl around. For instance, it could be due to teething, anxiety, encouraging behavior, and many more. It’s just that you have to figure out the correct reason and train him according to that and make him avoid moving the food bowl around.