Home » Pet Blog » Why Do Dogs Lick Us After a Shower?

Why Do Dogs Lick Us After a Shower? 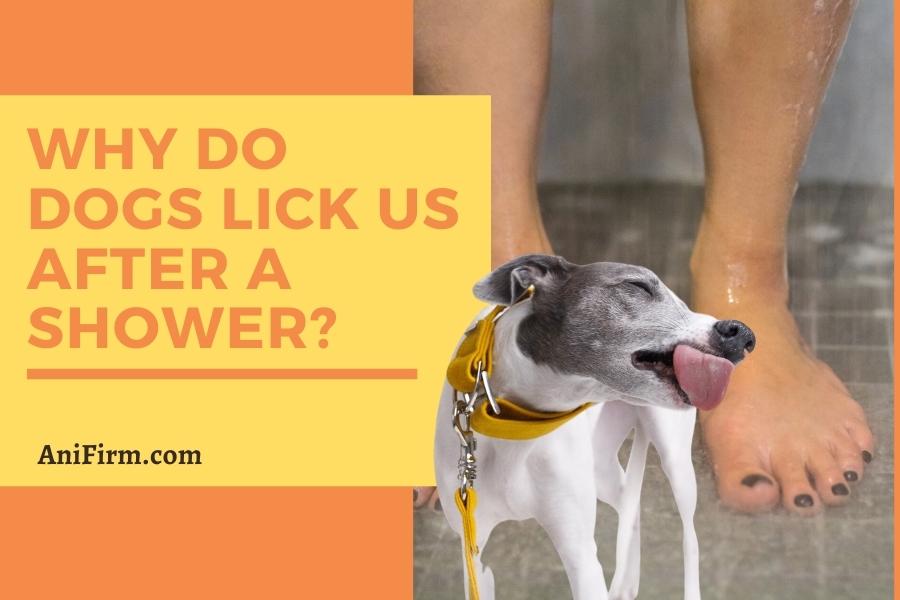 Dogs are adorable and faithful creatures that make great companions. However, sometimes they do some things which seem funny or strange. One of that strange behavior is your dog licking you after a shower. This might seem funny but if you are curious about this habit of your pup, then read on.

Your dog might be licking you after a shower for grooming, to show affection, to quench his thirst, to taste your lotion, to smell soap, or to show submission. Your dog’s behavior is amusing, and here are the detailed reasons why he may be doing it.

Reasons why your dog licks you after a shower

There can be many reasonable explanations for the behavior of your dog licking you after a bath. Here are some of those probable causes

Your dog thinks he is cleaning you by licking

Dogs lick themselves for grooming, clean and heal wounds, and dry themselves after bathing. So, they might be licking you after a shower because they think they are grooming or drying you off. You can avoid this by using a towel to dry yourself and not rewarding your dog for this behavior. Once you start using a towel, they will understand that you can dry off without their help.

Another reason your dog may be licking you after a bath is that the scent of your soap, lotion, or conditioner may seem interesting to them. A dog’s nose is better at identifying new scents. Your dog may be trying to lick you just to smell your scent. Licking a bit of lotion is fine, but keep them away from your bath products as those can be harmful to their health.

If your dog is licking your wet legs after a shower, then it could be because it was thirsty. Have you tried providing him with enough water to quench his thirst? Apart from this, sometimes dogs lick water because they like the taste of dripping water. You can try wetting your fingers and showing them to your dog. If he tries to lick your wet fingers, then he likes how dripping water tastes.

Your dog may be showing his care and affection

Dogs have a habit of licking, and one of the many reasons behind this behavior is showing care and affection. So, maybe your dog is expressing his emotions of love and care by licking your legs after a bath.

Maybe your dog is being submissive

It may be possible that your dog considers you to be the dominant one in your home, and maybe he is licking you to show his submissiveness. Although, if your dog only licks you after a shower, then we can rule out this possibility.

Some dogs just love to lick for no particular reason

Some dogs, as you may know, have a habit of licking. For them, licking is a way to understand their surroundings better. Therefore, they might lick you randomly because they like it. Although, if they show this behavior only after you shower, it might be one of the above reasons.

What else is different when your dog licks you after you shower?

Keep track of when he licks you after showering and when he doesn’t. Determine whether he has access to fresh water, whether he is hungry, sick, or simply wants to divert your attention to something else.

If your dog does not always lick you after you shower, it would also help to consider what is different when it does it. For example, if it does it when it does not have access to water, your dog might be thirsty.

Should you let your dog lick you after a shower?

If your dog licks you after a shower, then it isn’t a major concern; however, you should discourage this habit. If they lick your wound or skin cut, the bacteria in the dog’s mouth might cause an infection.

Apart from this, if your dog seems to be licking you excessively, it might be due to stress. If this behavior seems odd, we suggest you visit a veterinary doctor.

Should I be worried about my dog ingesting toxins from lotion or soap?

No, you shouldn’t be worried about your dog licking you after a shower because soap or lotion in very small quantities wouldn’t harm your pet dog. Just keep him away from soap bars and bath lotions to avoid the consumption of large amounts. Also, avoid encouraging them to lick your body parts as this is not hygienic.

How to train dogs to stop licking you after a shower?

Is It Normal For My Dog to Lick Me When I Get Out of the Shower?

A dog’s tongue is a vital sensory organ; they use it to better understand their surroundings. For example, they might be licking you because you smelled different. So, it is normal for a dog to lick you occasionally after a shower.

Your dog might lick you after a shower to groom you, taste or smell your bath products, show affection, show submissiveness, or he is thirsty, or maybe he just licks you after a shower because he generally likes licking. In any case, this is not a big cause of concern and if this licking behavior seems obsessive, get in touch with a vet.