Home » Pet Blog » Why Does My Dog Cry When It Sees Another Dog?

Why Does My Dog Cry When It Sees Another Dog? 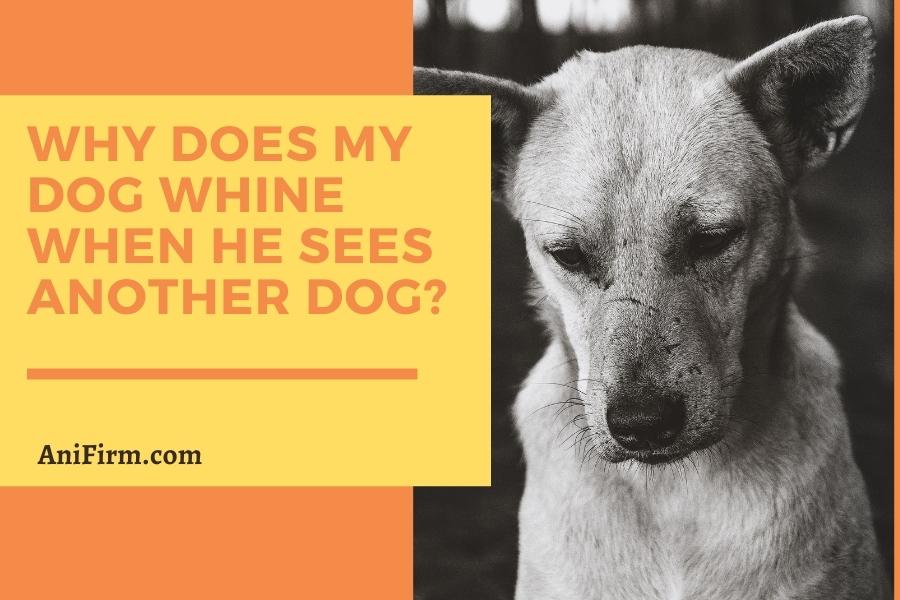 Dogs have been our companions for thousands of years. They use many ways to communicate, such as barking, growling, and whining. They whine to show what they feel the most at that moment. They whine to attract attention, communicate with other dogs, when they are excited, anxious, or trying to appease you, or when they are in pain. But sometimes, it becomes pretty annoying when they whine a lot. Excessive whining may show that your dog is in pain or discomfort.

Possible Reasons Why Dogs Whine When They See Other Dogs

Dog uses appeasement or submissive gestures to let other dogs know that they are not a threat to them or they have no intention of fighting. Also, when they feel threatened or scared, they show submissive behavior like hiding behind you and whining. If your dog is whining at another dog and using appeasement behavior like lying down, lowering his gaze, licking lips, tail tucked between legs and eyes averted, exposing their stomach, scratching, yawning, etc, that means he is avoiding conflict.

Dogs use whining to greet other dogs. They are very social animals, so they love to interact. If your dog whines a lot and wags its tails around other dogs, that means they are trying to make friends If they are properly socialized with them. Excitement and greeting could be one of the reasons why your dog whines at other dogs.

Some dogs whine or cry when they feel fear of harm from other dogs. And also, if your dog is not properly socialized with another dog, they feel anxious around them. Your dog whines maybe when he is afraid of another dog. If your dog has been attacked in the past, it might be the possible reason behind whining at another dogs.

Dog whines at another dog because he sees another dog as a potential sexual conquest. You have seen your male dog whine and become aggressive and get agitated when they see a female dog, who is in heat. So this could be the reason behind the whining of a dog at another dog.

Should you be concerned?

Dogs whine at other dogs for several reasons. There is no need to worry about your dog whining when he sees another dog. You can teach your dog to stop whining by yourself. It includes going to dog behaviorists for stopping the behavior, using positive reinforcement, or ignoring them whenever they whine at other dogs.

Don’t punish your dog for whining

Dogs don’t learn to do certain things by punishment. If you punish your dog, your dog is just going to be scared of you. When you approach punishment or correction from a negative point of view, you will get negative feedback. Whining can be quite annoying, but using punishment to stop it is not the correct option. Never punish your dog whenever it whines at another dog. It will only affect your dog’s mental health. It will only make them fearful or anxious, or your dog may become aggressive. Punishment is not a useful training tool for dogs. Avoid verbal or physical punishment to your dog. It is the wrong way to correct or punish your dog.

Possible ways to stop the whining of your dog

You have been thinking about how to stop the whining of your dog. After all, nobody wants a dog that whines at other dogs constantly. Here are some ways to stop your dog from acting weird around other dogs:

The possible way to stop whining is to stop allowing the behavior. Avoid unintentionally encouraging your dog to cry. Just ignore it when your dog whines. Don’t give them attention, and they will learn slowly and will stop doing it. Praise them with a treat whenever you notice a moment of silence. They will slowly understand that whining won’t get attention, and also, they will stop whining at the dog unnecessarily.

Let your dog meet with other calm & friendly dogs

Not proper socializing is the main reason behind dog whining. Either they become over-excited or become anxious, fearful, or stressed out and whine a lot when they see other dogs. Try to socialize your dog with calm dogs. Once your dog realizes other dogs are no threat to them, he eventually becomes used to them. He would become more energetic while playing with them. So it will help in stopping your dog’s whining.

Massage your dog to relax

Whenever your dog whines, just massage him on his head, stomach, ears, and other parts, which can make your dog relax. It naturally calms your dog. For dogs who are fearful and anxious about other dogs, massaging will help them relax. So by this way, you can stop your dog from whining at other dogs.

Go to the veterinarian or a dog behaviorist

Have you ever seen videos of huskies talking to their owner?

Certain dog breeds are more vocal. This could be due to the dog’s ancestry or original purpose. Small dogs whine a lot because they were bred to be watchdogs. Big dogs like huskies have high-pitched whining, and they are pack animals.

So here are the top ten dog breeds that whine a lot:

Whining is a common behavior shown by dogs. But you must know the actual reason behind it. If you cannot find the cause behind it, just approach a dog behaviorist to find out ways to deal with this habit. If you are trying to stop your dog from whining at other dogs, follow the above tips. There is no need to be concerned about your dog whining at other dogs until it becomes a severe issue.