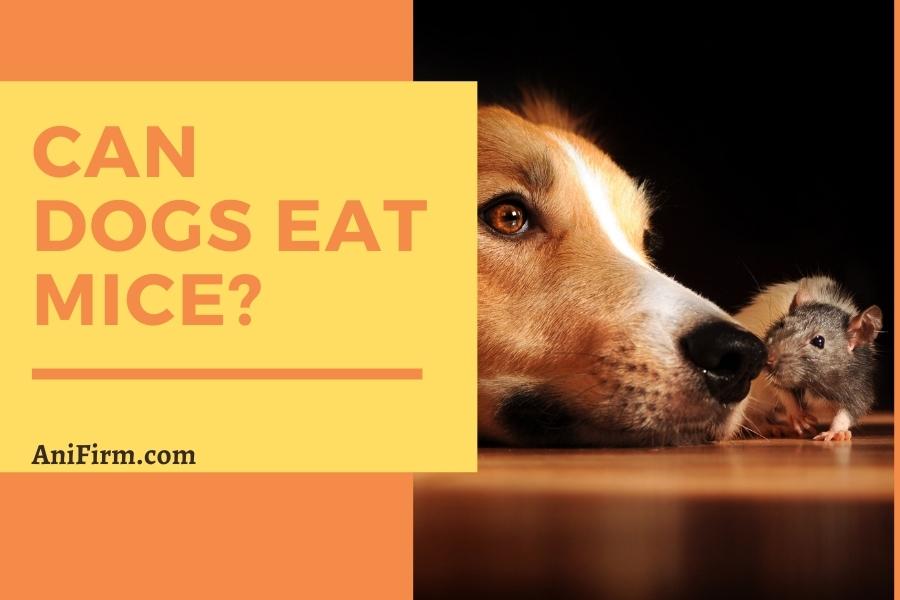 Keeping a canine is not an easy task. To keep them safe, we have to be sure about what they eat. When roaming around the areas, dogs pick up things from the surroundings and start chewing them. Although they are not aware of its consequences, sometimes it puts them at risk. The same is the case when a dog might have eaten mice.

Some people believe that feeding dog mice are acceptable (somewhere). But keep in mind that no rodent, no matter how small, is safe for dogs. If you suspect your dog has consumed any rodents, you should consult a veterinarian immediately to ensure your pet’s health.

We also want you to be sure about your dog’s eating habits because sometimes they put them at a stage where recovery takes a lot of time, or sometimes it is not possible. To help you understand more about “why it is not advisable to feed a dog with mice,” we discuss it in detail here. Keep reading!

It is a big “No.” Don’t feed your dog any rodents, such as mice, as this can be extremely dangerous and lead to poisoning in them. Sometimes it happens that a dog dies after consuming a dead rodent.

If the mouse dies after eating something poisonous like a rodenticide, it will create a deadly condition for your dog. Therefore, try to watch whenever you let your dog roam around, or there are mice in your house.

Note: Not only are dead mice known to create problems for dogs, but even the alive ones also make them suffer from different conditions like rat-bite fever and so on.

Why do dogs eat mice?

You’re probably thinking that allowing a dog to eat mice is impossible. Understand that dogs are known to eat whatever they get in their surroundings, irrespective of the consequences they will face. It is right to consider that they are true scavengers and do not pay attention to other factors when hungry. At this point, they need something that can satisfy their hunger.

When roaming around the surroundings, a lot of things are available. Dogs love to eat such things. Also, hunting appears to be a pleasing experience for them, and it gives them a sense of satisfaction.

Dogs begin to eat anything available in their surroundings to satisfy this sense of satisfaction. Although hunting and killing is not a common behavior exhibited by dogs, do know that it is giving them pleasure if they are doing so.

Can dogs get infected with parasites after eating mice?

Rodents are among the common carriers of several parasites, and mice hit the top among the list of carriers.

If your dog has consumed mice, there are high chances they will get affected by parasites as well. These are known to occupy a place in the canine’s intestines and, as a result, cause different problems. Some common parasites that your dog may have encountered after eating mice include:

Note: If your dog ate a mouse and you’re not sure if it was poisoned or not. Then, keep an eye on your dog’s health and, if it becomes ill, take it to a veterinarian.

For roundworm larvae, mice are the most common transmitters. These are known to infect dogs and cats both. When roundworm larvae occupy a place in your dog’s body, do know that they are eating the food you are giving your dog to eat. Your dog keeps on losing weight, and digestive issues are also very common after it.

In some cases, roundworm larvae occupy a place in your dog’s gut and are responsible for causing other health-related issues as well. The common problems your dog will suffer include:

For tapeworms as well, mice act as the common transmitter. If your dog eats any mice that have tapeworms on them, he or she may become infected. The tapeworm larvae occupy a place in your dog’s body and cause different problems for them. Although the effects of tapeworm are less serious as compared to roundworms, you cannot ignore them. The common problems dogs face include:

Toxoplasmosis is another parasite that your dog may get after eating a mouse. The problem of toxoplasmosis is somehow related to cats in general. But there are chances that dogs may also get infected by it. If your dog is infected with toxoplasmosis, the common problems they face include:-

Leptospirosis is the condition that takes place when spiral bacteria occupy a place in your dog’s body. Within 24 hours, the symptoms will appear, and you need to approach the doctor immediately. The common symptoms indicating leptospirosis include:

Note: It is right to conclude that parasites can infect your dog’s body if they have consumed any rodents. It doesn’t matter whether your dog has consumed live mice or dead ones, the chances of getting ill are equal in both cases.

If your dog is pregnant and has come in contact with “leptospira bacteria,” you need to be a bit attentive because this infection can be passed from mother to puppy through their shared blood flow. Do not ignore the condition and reach out to the doctor immediately. Also, there is a leptospirosis vaccine available that reduces the incidence of infection.

What are the effects of long-acting anticoagulants on dogs?

Likewise, in long-acting anticoagulants (LAAC), some other poisons, including phosphides, bromethalin, and cholecalciferol, are used to kill rats and can have a major impact on your dog’s health if they have consumed those mice that got killed after having these.

Can dogs get ill if they have consumed mice poop?

As we have already discussed, dogs have a scavenging nature, and there are possible chances that they have consumed mice poop as well. Don’t worry, and its consumption will not make your dog sick. There are very low chances that your dog might suffer from leptospirosis, but other than that, there will be no such problem at all. Furthermore, mice poop is very small, and spotting it on the playground is not difficult.

Can mouse consumption kill a dog?

Unfortunately, yes. If your dog ingested the mice, especially if they were wild or poisoned, it is possible that they might die.

You need to monitor your dog after such an episode because the symptoms take 24 to 36 hours to appear. After noticing the symptoms, do not wait too long to reach the veterinary doctor.

Note: Also, if you notice your dog having mice but can’t be able to stop them, contact the veterinary doctor immediately. Avoiding this condition is not acceptable in any case.

If you think of feeding your dog with frozen mice, drop the idea right away. It doesn’t matter whether you have purchased frozen mice or your dog gets raw mice from the environment, both of them show an equally adverse effect on his health.

Contagious diseases mice can transmit to your dog

Rats are considered to be the most common agent for transferring contagious diseases to dogs. However, there are some common diseases that your dog may suffer from after eating a mouse or coming into contact with one. These are as follows:

Tularaemia is a contagious disease also known as “rabbit fever.” If your dog has consumed an infected mouse, there is a chance they may develop this condition.

It is also known to pass from dogs to humans, and it is not advisable to let your dog out of your care when they are suffering from it.

Rat-bite fever is the condition your dog gets when it gets bitten by a rat. It is caused by Streptobacillus moniliformis in dogs.

This is a contagious condition and can be passed from dog to dog. But there are very rare chances that it may pass to humans from dogs. Therefore, if you notice any change in your dog’s behavior or in his lifestyle, do reach out to the doctor for a diagnosis.

Plague is the rarest disease that dogs can get, but there are some possibilities. A rat bite transfers this. If you notice any such bite on your dog’s body, reach out to the doctor immediately.

What to do when dogs come up with dead mice again and again for their owner?

First of all, it is important to know that dogs cannot, in some senses, distinguish between a good gift and a bad gift. For them, any object available in their surroundings is alright, and they can have it.

The major reason dogs keep bringing dead mice to their owners is to show affection for them. They are considering it as a gift and are also feeling happy by bringing it to you.

How to make the environment mice-free for dogs?

If you’ve ever considered getting rid of mice in your home, you’re in luck because there are solutions. The possible solutions to adapt are:

Is it possible for dogs to sense mice in their surroundings?

Dogs have a keen sense of hearing and, fortunately, can detect the presence of a mouse in the vicinity. But there is no evidence proving that they can only analyze that the noise belongs to mice.

Can mice hurt a dog?

If you are someone who keeps a mouse (a rodent) as a pet in your house, we suggest you give it to someone else if you also own a dog. Some people own wild mice, and they are looking forward to getting a dog too. If you get a dog and wish to keep him safe, take the mouse away from the surroundings.

Can dogs get rabies after eating mice?

You should be aware that dogs cannot contract rabies from rats. Also, there is no scientific evidence proving that rodents are responsible for carrying rabies to humans or dogs in the western world. As a result, the chances of rabies in dogs are quite low.

What are breeds considered natural mousers?

Some people have the habit of keeping dogs for pest control. Some specific breeds are known to be natural mousers. These are as follows:

All these breeds are small to medium in size. However, due to their large size, larger dogs do not fall into the category of dog mousers.

Consumption of mice is not safe for dogs in any case. There are chances that your dog has consumed some dead mice and will immediately suffer some health issues. In that case, do monitor your dog and approach the veterinary doctor too.

As a canine owner, you need to be sure about everything and pay attention to your dog when they are roaming around.

In some cases, your dog may have consumed wild mice, in which case some problems are very difficult to handle. Well, don’t be late to reach out to the doctor. Let them know the entire episode you have noticed. This helps them to analyze where they have to start the treatment to save your dog.