Are Dogs Smarter Than Horses? Let’s Find Out 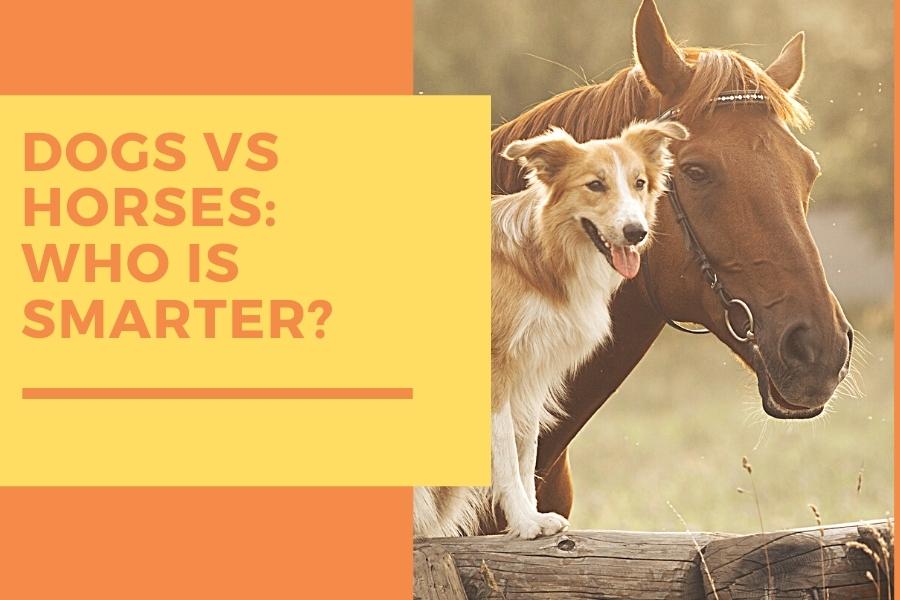 There are no IQ tests for animals. The dogs are great problem solvers, while the horses have a remarkable ability to learn faster. Both dogs and horses are intelligent and clever in their ways, But have you ever thought that dogs are smarter than horses?

How do you measure intelligence?

It is challenging to measure intelligence between different species as different kinds of intelligence are difficult to consider. Who are more intelligent horses or dogs? That would be unfair to both species because both are good on their own. By putting them in various intelligence tests designed to determine how fast they learn or how good they are at problem-solving, we can measure their intelligence to some extent.

How can we define animal intelligence?

Intelligence is nothing but the thinking capacity of a being to solve many problems during their lifespan. Animal intelligence is the ability to learn from experiences and to solve problems. The brain plays an important role in our body. Animals have been observed using a variety of brain structures, including the neocortex and hippocampus. The animal’s brain is made up of gray matter and white matter. Gray matter is responsible for posing information and making decisions. White matter connects different parts of the brain to exchange information between them.

Horses have excellent long-term memory. They can recognize humans whom they have seen before or made friends with. Horses can make emotional bonds with their trainers. Just train them if you want positive reactions from them by replacing the reward system with the punishment. Dogs have a powerful associate memory. They can only remember associative memory. They can remember their owners for so long because of their sense of smell. So dogs have good memory intelligence as compared to horses.

We know very well how well both horses and dogs can navigate. A horse can find its way by dropping its reins after the long ride and letting them guide the way back home. Horses always find their way home, no matter how far you are. Dogs were working animals before domestication. Nomadians would use their dog to navigate from one place to another because dogs have a good sense of smell, so dogs navigate through this smelling power. That’s why dogs are used as police dogs for bomb sniffers or cadaver diggers. So both dogs and horses have good navigational intelligence, and we can not identify which one has more.

Instinct is the main difference between dogs and horses. Dogs are predators while horses are prey animals. Both have different instinctual responses depending on the situation. The body of dogs is designed to attack or to hunt their prey. A horse’s body is designed to protect itself from being hunted. A horse’s instinct is very strong because they are always on high alert. If the dog makes a mistake in hunting its prey, its prey will escape, so predators always have a chance to hunt another day. While if the horses make a mistake in escaping from their predators, that means the death of the horse. Horses have great hearing and smell that helps them sense signs of danger. When we train the horses, they can think from the past by using their natural instinct to flee and trust their handler that they are safe. So both species, horses, and dogs, have a strong intuition.

Cognition includes perception, learning, memory, and decision-making. Both species have cognition levels above average. Both horses and dogs can show their smartness within their abilities by using cognitive intelligence. Both species have exceptional cognitive abilities, and evidence shows both have their strengths and weaknesses.

Horses vs. Dogs: No IQ Tests

There is no IQ test for animals, so we can not say which one has a higher IQ or which one is smarter than the other. Horses have a great sense of social and emotional intelligence, while dogs have the ability to learn new skills very quickly. Therefore, it is not fair to question which one is smarter than the other because both horses and dogs are good on their own. So we can not identify which has more intelligence.

Similarities Between Horses and Dogs

Differences Between Horses and Dogs

So, Are Dogs Smarter than Horses?

It is very difficult to find who is more intelligent because both have different natures. Both are intelligent and smart in their ways. They have been kept close throughout the centuries by us because they are so smart that our bond gets closer, and it continues to grow. You can’t judge any animal’s intelligence based on how well it takes commands or recognizes a human’s face. Horses have strong emotional and social intelligence, while dogs quickly learn new skills. Both species are smart enough and show great signs of intelligence in different ways, so we can’t say which one is smarter. And it is entirely unfair to say which has more intelligence.

So, adopt a dog or a horse and enjoy spending time with these loyal and intelligent animals.